The Tigrayan People Liberation Front (TPLF) have been conducting one of the longest and thorough “gimgema” (organizational and individual appraisal) in decades since the first week of October in Mekelle and Addis Ababa.

The following elected to the… https://t.co/M4wFE1z1Zz

On Wednesday, the TPLF Central Committee voted to elect new chairpersons and new members to the four vacant seats of the 9-seats Executive Committee.

He graduated B.Sc. and MSc in Electrical Engineering from Addis Ababa University and M.A. in Public Policy and Management from the University of London.

Debretsion Gebremichael obtained his PhD in 2011, from Capella University, with dissertation on the link between information technology and poverty alleviation in remote parts of Ethiopia.

He has become the fourth chairperson in TPLF history today receiving 36 of the 39 votes cast. 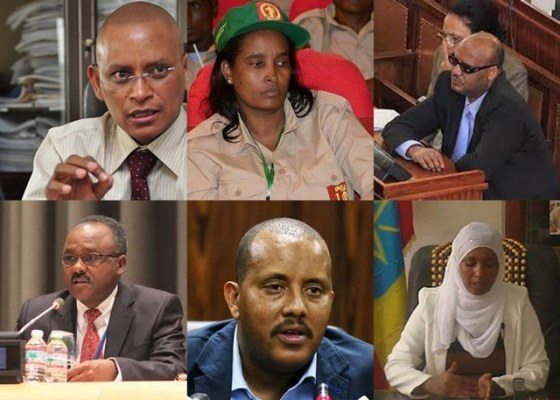 Fetlework graduated in MSc in from the London School of Economics in early 2000s, securing the scholarship opportunity on her own. Her decision to go to London, against the objection of the party leadership, caused problems on her employment when she returned.

Fetelwork served as Director General of the federal Finance Intelligence Center until 2015. She was elected to the Central Committee of TPLF in 2006 and to the Executive Committee in 2015.

Fetlework was elected today as the first woman deputy Chairperson in 42 years of the organization’s history.

Asmelash Woldeselassie is a veteran of the armed struggle and Government Chip Whip in the House of Peoples Representatives since 2015. Asmelash studied his first and second degrees in law and is a PhD candidate currently.

Abraham Tekeste (PhD) is the minister of the Finance and Economic Cooperation (MoFEC) since 2016. He was State Minister at the National Planning Commission from 2015-16 and State Minister of MoFEC from 2010-2015. He obtained PhD in Economics from a university in Switzerland.

Getachew Reda, 43, a graduate of the law schools of Addis Ababa University and the University of Alabama, is the Director General of Legal Research Institute since 2016. He served as head of the federal Government Communication Affairs Office, with the rank of minister, and assistant of the Prime Minister since 2013.

Kerya Ibrahim was head of Urban Sector at the TPLF Secretariat. She served in Women Affairs Bureaus of Mekelle city and of Tigray region. Her election to the Executive Committee came as a surprise.

Abraham Tekeste, Getachew Reda and Kerya Ibrahim didn’t take part in the TPLF armed struggle. Tedros Adhanom used to be the only person without armed struggle background to have joined the TPLF executive committee. His seat was vacated last May as he left to lead the World Health Organization (WHO).

Getachew Assefa declined nomination for the chairperson position, despite strong support from the Central Committee.

Several members of the Central Committee escaped suspension because the two-third vote requirment for the measure was not met.