Dr. Abiy Ahmed is now there as democratically elected PM for all of us as peoples of the nation. Being young (early 40’s), educated, energetic, ethno-nationalist, Dr. Abiy will hopefully perform according to the very interests of all nations, nationalities and peoples of the country.

Thank you! OPDO for producing such an ultramodern leader. This party is full of young and progressive leaders unlike that of TPLF which is full of old-guards (incumbents for life) who don’t want to relinquish power to the young and educated once.

First and foremost, there is nothing more pleasing to see than a PM (the highest government power) from the great Oromo ethnic for the first time in Ethiopian 3,000 years of history. It is legitimate and utterly well acceptable to see a PM emanated from the largest ethnic of the Country. As an optimistic and reasonable citizen, I am very happy to see a PM from that ethnic in my lifetime. 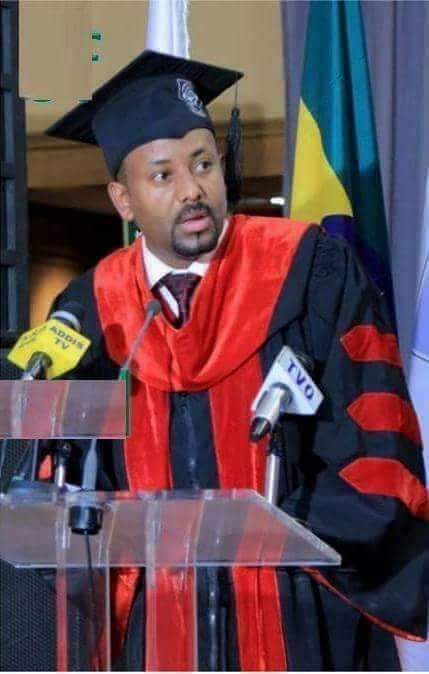 PM Dr. Abyi has already begun to heal the old wounds of EPRDF. It is acceptable to say that the new PM has set out the long journey for unifying the heterogonous societies of the nation beginning from its first inaugural speech in the parliament. He really performed much more than expected by many. That was an amalgamative and balanced discourse which emanated from the bottom of his heart, which played a substantial role in bringing all categories of the people into the same page.

For instance, based on the stands of facebookers reflected on the social media, Dr Abiy’s first speech at the parliament has unexpectedly made almost all facebookers of the citizens speechless and astonished.

His heart-breaking bow when receiving the national flag from the former PM, and his stunning affection showed when raising the Constitution, all these gestures have made Dr. Abyi to be uniquely standout among other fellow incumbents.

Besides, his deep love to his Mom, wife and children is a clear indicator of his devoted care to all moms, wives, and children of the country.

He also interestingly articulated about the bond between Ethiopia and Ethiopians, as: – “We are Ethiopians, and when we die we will be Ethiopia.” This is to express that Ethiopia is the sacred soil of Ethiopians. Likewise, he verbalized “…. A particular citizen may move out of Ethiopia, but, he/she can never get Ethiopia out of his heart and mind.” Such inclusive and extraordinary vocalization would definitely wrong no one rather rally all kinds of the citizens for uniting the multicultural societies into one strong nation.

Moreover, Dr. Abiy could be labelled as a silence-breaker of the traditional leadership behaviors of his predecessors, for paying a great respect by proudly pronouncing about the country’s epic and defensive kings as well as their priceless sacrifices in different place for defending sovereignty of the nation against various foreign aggressions in the past.

Furthermore, other reasons why Dr. Abiy could be able to be warmly accepted as the new gear-changer PM by many citizens are: – his repetitive calls for unity and respect; his strong-minded and progressive words; as well as his dogged promises, can be precursors for widening the ajar door for better democratic environment and free press.

However, the devil is in the implementation of all those promised words that seem inviolable and attainable. Hence, to do so, he should be a man of action which were commonly the lacking characteristic of most of the former Prime Ministers and presidents of the nation.

Therefore, having a PM from Oromo is not an end by itself to the people of Oromo in particular and to the peoples of Ethiopia in general. Even though, it is plausible but that is just an auxiliary thing for the common vast Oromo people’s main demands. Like the other ethnics’ constitutional demands, the people of Oromo is also hoping a practical economic and political transformations from the new PM.

Accordingly, PM Dr. Abyi should be cautious and responsive to all important demands that are used to be deliberated through consecutive public protests. In the first place, he should emancipate himself from being remained as a paper-tiger just like his predecessor PM. He must be a man of implementation at all circumstances.

So, basically, Dr. Abyi should plant a productive seed that can yield a real multiparty system. Activities that demean the flourishing of democracy has to be denounced at all levels by all strong terms possible. Besides, liberating the country from its customary and regressive comportments of political monopoly and allow for freer political participations by any political opposition parties as well as individual political and ideological stands. The expression of different ideas and beliefs should be protected tangibly. As the country encompasses multiethnic societies, the ruling party should be remade in such a way that can be customized to develop political tolerance as a mandatory condition in ensuring political demands of all kinds of citizens of the country.

Similarly, in his Political Plans (among others):- opening the political (democratic) space at least to the level it was before the 1997 E.C; opening wider the opportunity for practicing free press medias; solving the Ethio-Eritrea boarder issue; and legally backing the opposition political parties so as not to rupture further thereby they can be able to hold some significant number of parliamentary seats which would beautify the parliamentary debates by representing and deliberating diverse voices of the heterogeneous peoples of the country.

And, in his Social Plans (among others):- Bringing the people to people relations among all regional states to an irreversible level, not just between two or three of them; and by reasonably advocating the merits of unity, bringing back the fractured groups/societies of the nation into a sense of unity at all costs less than the recognition of diversity.

However, in this case, what care should be taken is that, when we had been preaching our diversity for the last 27 years, that was unquestionably at the cost of Unity and Ethiopianism, and that was a failed approach we experienced. On the other hand, beginning from the last month (right after the new PM held power) it seems that various Medias of the country are currently preaching Unity and Ethiopianism by totally abandoning or leaving our diversity behind the screen. I don’t know if it is being done as a catch-up or damage-control strategy for our former mistakes, and I am afraid if we are going to commit another stupid blunder.

Berhanu Tsegay is a resident of Addis Ababa, Ethiopia, and a Masters Degree holder in Development Studies. He can be reached at +251943-304555 or [email protected]