The Federal Revenues and Customs Authority of  Jigjiga branch with the collaboration of security agencies seized illegal foreign currency which is from the capital city of the country Addis Ababa.

This contraband hard currency was supposed to pass illegally through Wuchale (Wajale) town of Ethio-Somali region to Somalia Republic, with the intention of returning it back illegally to the country in illegal circulations.

The illegal hard currency was seized at Babile town being transported illegally by a caster bus which its plate number is code (3) A29482 A.A with a driver named Tadios Wolde and also at Wajale town with another car. 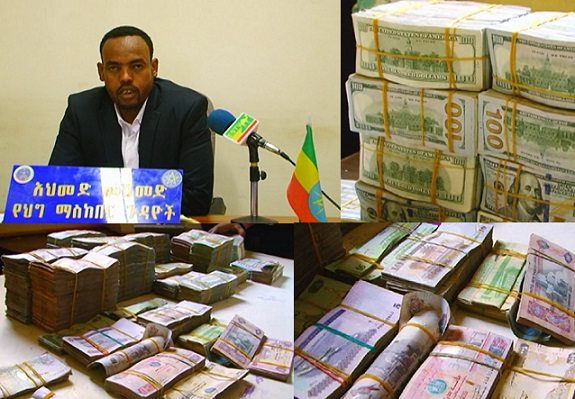 According to Mr. Ahmed Ugas deputy manager of Revenues and Customs Authority at Jigjiga branch, “the amount of this seized illegal hard currency at Babile is US Dollar 1,722,652, Saudi Riyal 580,509, UAE Dirham 32,750, and Qatar Riyal 1,851 whereas at Wajale towna sum of 31,664 USD was captured”.
He also added that all of those illegal currencies held were kept or deposited in national commercial bank of Jigjiga branch.

Besides that, the driver of the vehicle and the owners of the currency are now in the hands of police under investigation.

2 Reactions on this Article