Irob people’s rally planned for Sunday in to protest the possible break-up of their community by the Ethio-Eritrea border ruling was cancelled.

The protest rally was cancelled after several government affiliated social media users and self-proclaimed supporters of Prime Minister Abiy Ahmed campaigned against it.

Some of those social media users openly called “Qerroo” to take measures against the demonstrations, alleging that it was a protest of TPLF supporters (read: Tigrayans) against Prime Minister Abiy Ahmed.

The Amesterdam based ESAT television and the Director of Oromo Media Network (OMN), Jawar Mohammed, made similar charges. Though, they stopped short of calling for an active violence.

The Irob people, who are about 40 thousand, live in the northern tip of the country, on the border with Eritrea. Though intimate with Tigrayans, the Irob have a distinct language. They are known for their proud heritage and bold expression of Ethiopian sentiment.

The community have long been opposed to the Algeries agreement and the border rulings that breaks up their community into two countries, should it be implemented.

Irob people activists say, about 96 of their relatives have been abducted by the Eritrean government and ignored by Addis Ababa.

The Irob community held demonstrations in Irob woreda and in Zalambesa city, in Tigray, following the statement of the EPRDF executive committee last week.

They had planned to stage a rally in Addis Ababa on Sunday to plead for national and international attention. It had to be cancelled, however, as it was clouded by threats of violence.

It is not clear if similar threat of violence will prevent protests which are being planned for by opposition parties in Addis Ababa in the coming weeks. 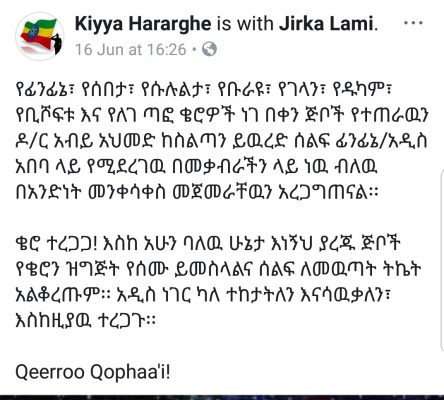 Supporters of the Prime Minister claimed that TPLF was behind the protests against the implementation of the Ethio-Eritrea border delimitation ruling.

A statement by an emergency meeting of the TPLF Central Committee last Tuesday concurred with the decision of the EPRDF executive committee, albeit calling for caution in its implementation.

Allegations of conspiracy against the PM gained currency since last week Wednesday, a day after the EPRDF executive committee meeting, when the Prime Minister, speaking in an anti-corruption alliance conference, blamed “sabotage” for the inflation and other economic woes in the country.

This week on Thursday, following ethnic violences in the SNNP region, the federal government communication office made similar obscure references in a statement which admitted in general terms and for the first time the ethnic clashes, boundary conflicts and displacements, taking place in various parts of the country for the past two months.

The statement vaguely blamed all those incidents on “conspiracy of the few”, “forces opposed to the ongoing change”, “forces aimed at dismantling national unity”, driven by “personal interest” and “destructive forces”. The statement pledged to take “measures” against those unnamed, few, anti-change, anti-unity and destructive forces.

The Prime Minister echoed those allegations the next day on a televised speech calling his supporters to resist “daytime hyenas” opposed to his reform. Social media activists, who are close to his clique, immediately echoed his phrases interpreting them as a reference to TPLF and/or Tigrayans.

Rumors of conspiracy against the PM have spread in the social media in the past days, along calls for a demonstration in his support.

Some observers claim the rumors and the call for demonstrations are meant to divert public dissent on the EPRDF executive committee decision.

The announcement to handover the disputed territories to Eritrea and to embark on sweeping privatization of public assets was met with divided public opinion, even among staunch supporters of the Prime Minister. Though, EPRDF member parties, including TPLF, appear on board.