Somaliland president Muse Bihi Abdi conducted his first state annual address to the nation on March 25th 2018, held at the Guurti premises. Addressing the nation, the incumbent President of the Republic of Somaliland, Muse Bihi Abdi has spoken on a wide range of issues.

The President, who has been in office for only 100 days, stated that he wants to deliver his future priorities in the new government. “It is a prestige for me to deliver my first state address to the nation through the two houses of parliament in Hargeisa with the attendance of all parliamentarians comprising of house of Guurti and house of representatives in this join a session of parliament on the 25th March 2018’’.

The wide range of issues that the president spoke at this annual speech were included by;  the security, Somaliland Foreign Affairs, Somaliland and Somalia talks, the Economy and Devaluation of Somaliland currency, finance and Economic development, Social affairs, Good Governance and fight against corruption, Judiciary development, Drought and climate change and holding local parliamentary and council elections in 2019. 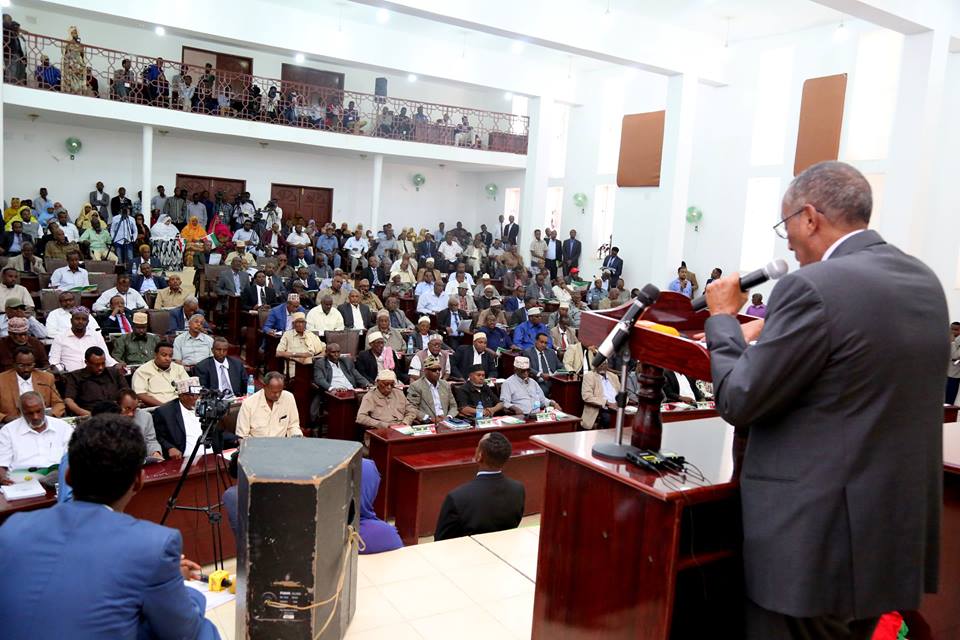 In the national security, the president stated that peace and stability remains in the country and security be internal and external is his government’s priority to protect.  He told the parliamentarians that his government reached the borders with Somalia and all troops have been put on alert to protect the stability of Somaliland due to the aggression of Somalia’s autonomous region of Puntland.

He promised that they will do every effort to prevent anybody or a group who may try to destabilize Somaliland‘s long standing peace and tranquility. The president added that his government will be closely working with neighboring countries to secure the borders of Somaliland with Djibouti, Ethiopia and Somalia as well.

Speaking on Somaliland foreign Affairs, the president stated that Somaliland foreign policy is based on getting international recognition, tightening the relations with African Union, IGAD, Arab countries, and the other world nations, entering into direct foreign investment and living in peace with neighboring countries.

The president finally  praised role of  the United Arab Emirates to implement key projects in Somaliland following the strong position of the Somalia’s federal government go against DP world Berbera port deal but added that deal will be a success to Somaliland and will be carried out as planned.

During his speech, the incumbent president, Muse Bihi stated that the talks with Somalia have been halted due to the current situation where Somalia federal government took a strong position to the development project between Somaliland and United Arab Emirates.  The president officially stated that the talks have been closed down for the current position of Somalia against Somaliland’s sovereignty which he said to be irrevocable.

In his national address, the president also underscored that inflation rates now in a serious position to Somaliland social affairs.  He added that committee nominated to deal with inflation and the devaluation of Somaliland currency reached decisions for which he is committed to carry out in order to empower the central bank to regulate the market.

According to the president, fighting corruption is one of his top priorities and he underlined that his government will be a zero tolerance to corruption and he will not accept any government official to misappropriate or embezzle public properties requesting the parliamentarians to work with his government to behave in a transparent manner to all government operations.

In the justice system, the president said that rule of law will be higher than before.  He claimed that judiciary to be the central pillar for which the society wants to get in access and that his government will be committed to the development of the justice institutions.

In the economic development, the president stated that ports, roads and airports have a greater importance to the nation’s development. For this purpose, the government will complete the on-going road project between Burao and Erigabo and they will start the construction of Berbera corridor with help of the United Arab Emirates and Ethiopian government during this year.

Speaking on socials affairs, the president gave emphasis on the education, health and employment sectors.   Urging the solidarity, the president of Somaliland Hon. Behi reiterated the need for the people of Somaliland to be united to create business in the country in order to prevent from the high level youth unemployment that prevails in Somaliland.

In his annual address, the president also underlined that his government is committed to preventing the droughts and will come up with new strategies to dig wells, dams and other mechanism that will capture the water rains since the climate change is seriously affecting the country.

Holding the Local parliamentary and council elections in 2019, the president promised to hold them on time in march next year  and rejected a request from Waddani Main Opposition Party to dismiss the electoral commission and nominate new ones.  The president declared ahead of the parliament, this demand from Waddani is illegal according to Somaliland constitution.

Finally, the president concluded his annual address on the latest visits to the United Arab Emirates and those to the neighboring countries like Djibouti and Ethiopia where he strongly praised for Ethiopia and United Arab Emirates are the strong diplomatic friends for Somaliland which can help this small country to get its international recognition.

* Muse Jeeh, a freelance writer based in Hargeisa, Somaliland. He can be reached at [email protected]

Muse Jeeh is a freelance writer based in Hargeisa, Somaliland. He can be reached at [email protected]